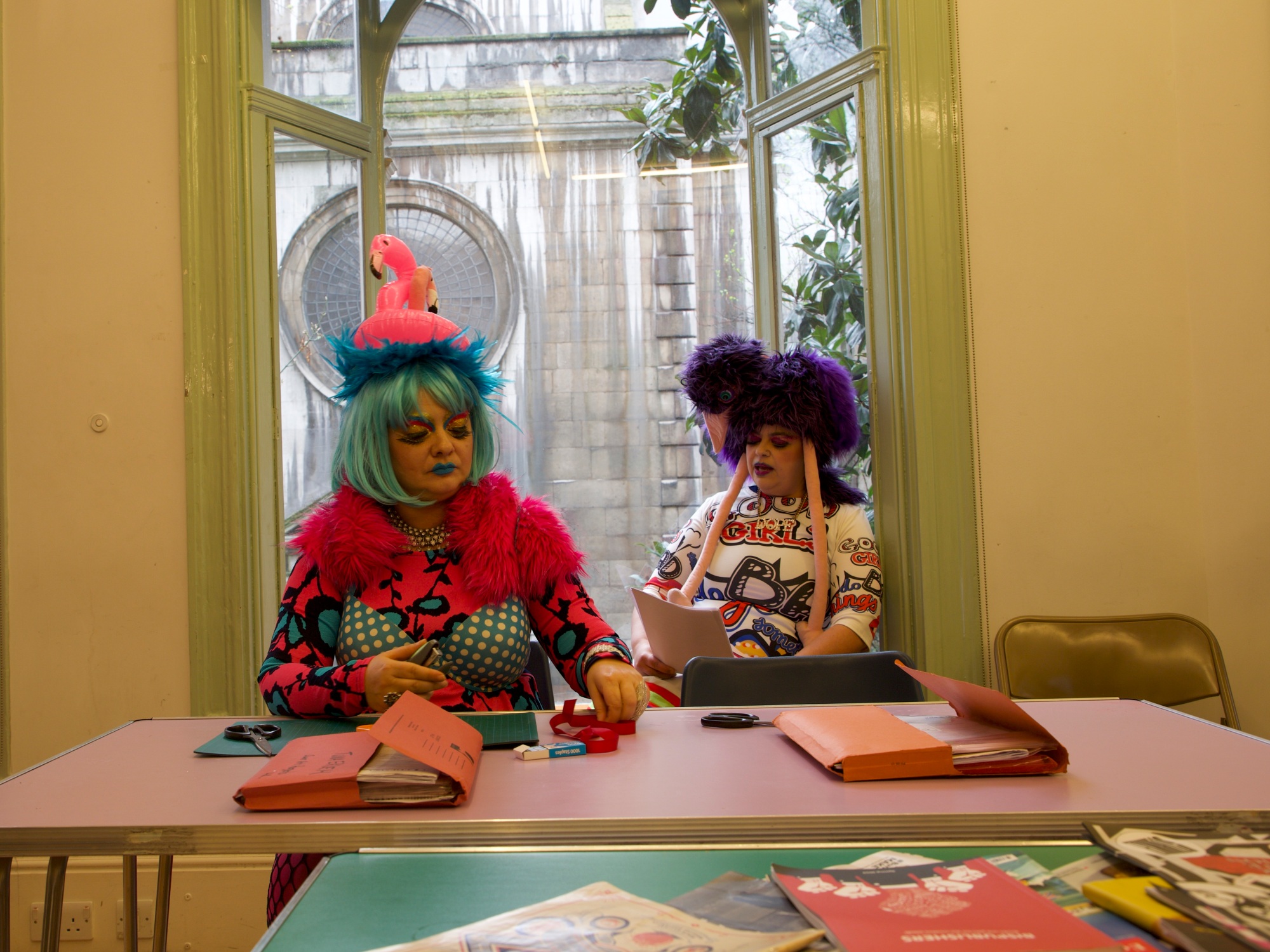 In this performance to camera, Istanbul Queer Art Collective members Tuna Erdem and Seda Ergul, cut into pieces the documents they had to submit to the Home Office to extend their ‘leave to remain’ in the UK. Once the documents, with the total weight of three kilos, are hand shredded the artists, clad in absurd costumes with birds for headpieces, proceed to turn them into Moebius strips: a ‘queer’ topological phenomenon where there is no border between the outside and the inside. This process is accompanied by a cheerful live voice-over, reading excerpts with topics that range from the migratory birds that visit the UK, to the rules and regulations governing the privacy of the documents submitted to the Home Office. The resulting mass of strips are subsequently attached to the poster covered wall of the MayDay Rooms, which to the artists represent the kind of archive they are eager to be a part of. All is done in a tongue in cheek manner, in accordance with the collectives’ firm belief in the “queer art of failure”. After all, one possible definition of ‘queer’ is shredding all identity and shedding feathers is one of the main motivations for migration.

With thanks to MayDay Rooms London and Kevin Biderman.

Istanbul Queer Art Collective (Tuna Erdem & Seda Ergul) is a performance art collective founded in 2012 in Istanbul. The collective’s work has been shown at various venues around the world such as Framer Framed Amsterdam, Blok Art Space Istanbul, Mamut Art Fair, If Istanbul Independent Film Festival, Istanbul LGBT Pride Exhibition, Zurich Les Belles De Nuit Festival, Queer Future Exhibition, Athens Sound Acts Festival, Zürcher Theatre Spektakel, SGFA 2016, Deep Trash 2017, Bonington Gallery Nottingham and the public program of the 15th Istanbul Biennial. The collective is currently based in London and is comprised of its two founding members Tuna Erdem and Seda Ergul. Erdem and Ergul are firm believers in what Jack Halberstam calls the “queer art of failure”: they stir away from the competitive drive towards perfection and embrace failure in their performances. They also believe both gender and sexuality are performative and engage in what Renate Lorenz calls “radical drag”, which is a kind of drag that is not necessarily based on gender but the transgression of all boundaries. They express this belief by presenting themselves as cisgender female drag queens.