From Chibok To Calais Live
In the performance, I read out the navigation route of a round trip from Chibok, northern Nigeria to Calais and back. My voice was drowned out by a barking police security dog and interruption by water bombs being thrown at the reader. In 2014 I stumbled on Charlie Hebdo’s hijabi cover depicting the Chibok girls on the move with the headline ‘welfare queens’. Charlie Hebdo was very astute in bringing disparate concerns about the Front National’s proposals (to ban all non-white immigration) and the displacement of people by a different type of terrorism that darkly mirrors the terror at home. That it was misread by some as racist in itself, is one of the reasons I think it’s very powerful and I kept going back to the image.

FRTC looks at borders from a survival perspective where people are deserting everything they’ve ever known for an uncertain place. They might appear to be taking nothing with them but the baggage/connotations associated with their bodies can never really be shed off. It strips down the complexity of displacement, uncertainty and disorientation to material elements (soil and water) that goes back to lend itself to some of the conditions that are responsible for the global shift.

Unbuilding
A temporal installation of blocks of ice consisting of saltwater and soil. Salt was added to the wall-like installation to further accelerate the reaction time causing the structure to collapse rapidly. Unbuilding homes in on the durability of water as both a lifeline and a barrier – where it connects and isolates continents all at once.

The water pouches and the collapsing ice wall were strongly read as responses to environmental depredation. The Nigerian documentary Nowhere to Run examines the impact of environmental threats in a very localized context with far-reaching ramifications. 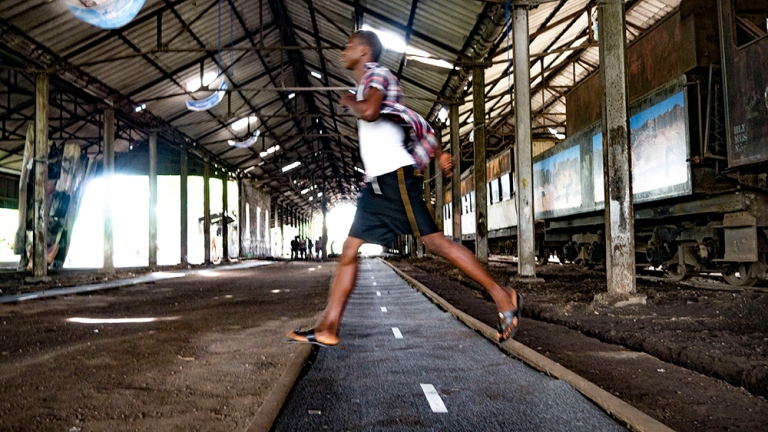 Images courtesy of the artist.

GRA (Government Reserved Area)
A site-specific installation responding to the Lagos Biennial’s Living on the Edge theme, which reflects on Lagos as a place of contradiction in which many improbabilities materialise. Situated in a derelict terminus at the Nigerian Railway Corporation site, the piece repositions the road surface in a formerly public but increasingly private site as an exercise in boundary marking, alluding to the stark inequalities in Nigerian society reflected in territorial control/ownership. Without instruction or signage, the public produced varied responses – some jumping over the piece and others casually walking on it.

GRA observes borders through inclusion/exclusion. Looking at class in a context like Lagos where inequality is often harshly juxtapositioned in very overt ways. Elites at once seal themselves off from the masses but only seem to enjoy their excesses when it is acknowledged and validated by the public. While the open display of wealth appears crass to foreigners, it has its uses. For the most part, the local public respond with admiration rather than criticism, often perceiving the lifestyle of the rich as markers of aspiration rather than something to be despised.

Alessandra Cianetti: During our conversation, we have been touching various topics and talking about borders and the UK we obviously came across Brexit. Although we look at it from two very different starting points, I could see more commonalities than differences in how we look at the role of the artist within a situation of increasing proliferation of borders, control, and hardship, especially for marginalised communities. Would you mind to share with us your thoughts on what relevance performative practices can have in complicating both cross-national discourses and relations with different publics/participants in our socio-political contemporaneity?

Eca Eps: Contemporary politics has been narrated in highly polarizing language such that a huge vacuum has been created – in which artists are engaging within the competitive terms of discourse rather than creating new dialogue or complicating the discourse. But this vacuum is an opportunity – it is within this space that I locate the role of artists to engage with the discourse from all angles, to play with misconceptions, produce counter narratives and produce actions that are challenging.

Reading this Boris Groys piece, it struck me that the artworld might not recognise just how things have changed and to an extent, it has become the establishment that it once railed against. Groys argues that artists naturally feel solidarity with those who are socially/economically/politically underrepresented and art becomes a vehicle for expressing their grievances. But that position of isolation and feeling ‘left behind’ is not unique to us – it’s a characteristic that defines a lot of alt-righters and populists. The globalization project has had its winners and losers. Both sides claim to have suffered more than the other but use the same terminology, creating a struggle for ownership of political language.

Groys correctly notes that the language of identity politics has been highjacked by the New right to articulate their struggle against their apparent oppressors – the liberal elite. The same is true in the rejection of facts and its dismissal as ‘fake news’ (which appears to be a new right phenomenon but isn’t). This has been in the making since post-modernists / the academic left spearheaded the pluralization of everything, discounting objectivity in favour of experience but when the far right borrows the same tactics, it recoils.

The key is not to be embroiled so deep into the contested positions but really work around the grey area. This is the strength of performative practices over more fixed mediums.

Groys repeats the mantra about the longing for territorial control as a symbol of inwardness among Brexiteers in that they want different cultures to stay in their lanes. It’s a willful denial of the complexity of the politics that informed Brexit, with many of the concerns at the heart of the matter relevant to people across the spectrum – remainers and otherwise. Demanding sovereignty, direct democracy and territorial control – throughout the world over, is a recurring phenomenon.

My challenge with the almost unanimous rejection of opposing views within the arts is an unwillingness to exist in the world for what it is – instead, adopting a position that relies on instruction. For example, if the papers tell us that hate crime against ethnic minorities has increased say, 500% since the Brexit vote, a report that would benefit all papers left and right – we are very quick to use that in itself to inform our actions – when on closer inspection the reality doesn’t add up.

What would be a radical response is a rejection of the doomsday narrative (that keeps telling us that globalism isn’t working but will consume us all) replaced with action that directly or indirectly challenges that. What happened to British art that satirized moral panics? All aspects of play have been replaced with didactic actions that reinforce the fragmentation of society.

As an immigrant to Britain and traveler, I’m always struck by the incredible downplay of Britain by natives. I understand that it is informed by an awareness of the sins of empire, which is important, but I’m still taken by the extent to which atonement goes. For example, the belief that Britain’s ability to flourish through art, technology and innovation is inextricably tied into the (economic) EU project, or that Britain is a place in which minorities now live in a state of crisis or under untold discrimination.

Grayson Perry’s observations that Brexit should serve as a wakeup call for the arts in how disengaged with the public it has become are absolutely right. Re-listening to his Reith lectures, they are not comments that are made to maintain any new edgy position. Perry has always been astute in questioning the limitations of art on intervening in politics in the real world beyond the framework of the socially-engaged practice which self-styles as radical but has unspoken rules around what it considers acceptable. At the same time, measuring creative practice through outcomes would completely miss the point.

The human cost of the EU project is becoming more evident as the Libyan slave trade demonstrates. Blu’s mural Fortress Europe (2012) was featured in Aesthetics of Crisis which looks at critical artistic responses by street artists on the European Union pre-UK referendum. 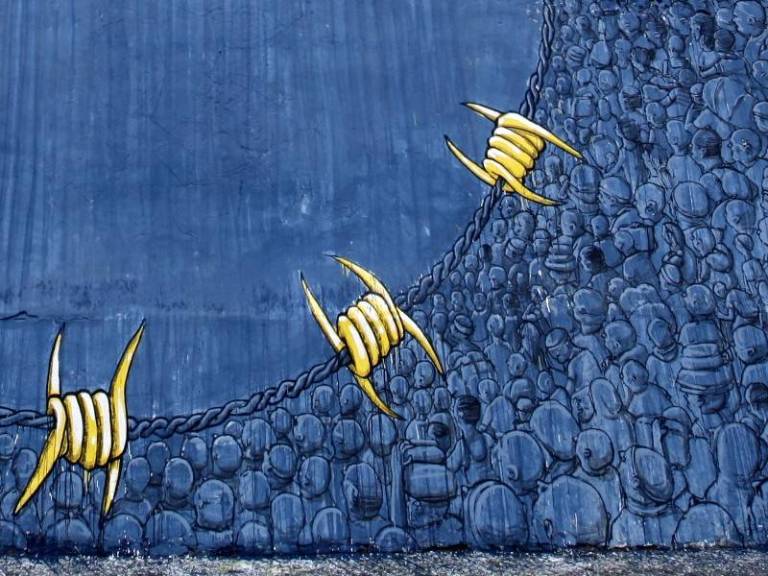 Eca Eps (UK/NG) work centers on imposition and the tension it produces, recurrently employing performative strategies to intervene on the shifting contest around rights and freedoms epitomised by territorial struggles. Performative actions are used to play with space and place, often combined with large-scale textile installations. Taking momentum from matters arising within the local, the artist looks outward to draw on the commonality of universal human relations. By drawing on the influence of multiple artistic traditions, Eca Eps also move beyond tactile forms to employ the use of text and speech as intervention in works such as boko, to interrogate penal codes enshrined in divine law, often sealed off from scrutiny. Since much of her process sets out to question and reconsider inherited ideas, Eca Eps’ approach remains expansive and multi-disciplinary, including photography, film, and print.